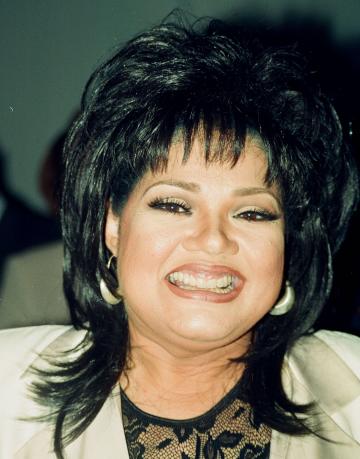 Image Citation
Angela Bofill was born in Brooklyn, NY to a Cuban father and a Puerto Rican mother. She grew up listening to Latin music and was also inspired by African-American performers. Her weekends were taken up studying classical music and singing in a city chorus. It was as a teenager that her professional singing began.

She performed with Ricardo Marrero & the Group and Dance Theater of Harlem chorus before being introduced to Dave Grusin and Larry Rosen of the jazz label GRP Records by Dave Valentin, her friend and jazz flutist. Grusin and Rosen signed Bofill and produced her first album, Angie, in 1978. Angie was well received both critically and commercially and included the chart single "This Time I'll Be Sweeter" (co-written by Gwen Guthrie and Haras Fyre), and Bofill's sprawling jazz composition, "Under the Moon and Over the Sky".

Less than a year later, a second album, Angel of the Night was released and outperformed its predecessor. The album included the chart singles "What I Wouldn't Do (For the Love of You)" and the up tempo title track, as well as the song "I Try", written by Bofill and covered by Will Downing in 1991. The reception of these albums positioned Bofill as one of the first Latina singers to find success in the R&B and jazz markets.

Clive Davis, the head of Arista Records, showed interest in Bofill. Arista had a distribution deal with GRP. Bofill switched labels for her next album, Something About You (1981). Produced by Narada Michael Walden, the album was an attempt to move Bofill into mainstream R&B and pop music. It didn't perform as well as previous releases, despite the singles "Holdin' Out for Love" and the title track, which both reached the R&B Top 40.

The following year, she and Walden reunited for Too Tough. The title song reached No. 5 on the R&B chart and spent four weeks at No. 2 on the Dance chart. A follow-up single, "Tonight I Give In", reached the Top 20. Several months later, Bofill released her final collaboration with Walden, Teaser. The album failed to match the success of Too Tough but did produce one Top 20 R&B hit, "I'm On Your Side", which has been covered by several artists, most notably Jennifer Holliday, who had a Top 10 hit with it in 1991.
Biography Source
Wikimedia Commons
Artist Website