Frames Per Second commonly referred to as FPS is an important unit to know about, especially if you’re in the Film Scoring or Sync industry. Music for commercials, movies, and all kinds of media which include moving pictures will play at a specific FPS rate.

As some of you may know, what we see on videos is actually a succession of hundreds of pictures appearing one after the other very fast. The number of pictures that successively appear every second is what we call the “Frame Rate”, given that every frame is a picture. For this reason, we use the unit 'FPS' -- Frames, or pictures we see, per second.

That depends on several factors concerning the Frame Rate: the place/medium where you’re watching the movie (old TV, Movie Theater, phone, etc.) -which might play the movie or video at a specific Frame Rate-, and finally the FPS used WHEN recording the video you're watching.

There are commonly used framerates that we see over and over, which we call the "Standard framerates":

30 fps which started when Black and White TV appeared

*it still is a 30fps video, just slowed down a little bit for technical reasons.

I know what you might be thinking, this is a mess! Why doesn't everyone use the same Frame Rate? There's a history behind each of these framerates and a technical reason tied to them, and as technology has advanced new framerates have appeared to keep up with the advancements while not creating a disaster in TVs around the world. I'd recommend you look up the history behind it if you'd like to learn more about the reasons behind it, but for today we'll focus on how can we make sure we work properly on our music to these framerates.

Generally speaking, most DAWs will recognize the Framerate of your movie during the importing process. However, I always recommend that you check it beforehand on Quicktime, just to make sure.

The way to do this is by using the inspector. To open it up, launch Quicktime by double-clicking on your video on Finder, and once it's open click Cmd + I and the inspector will show up: 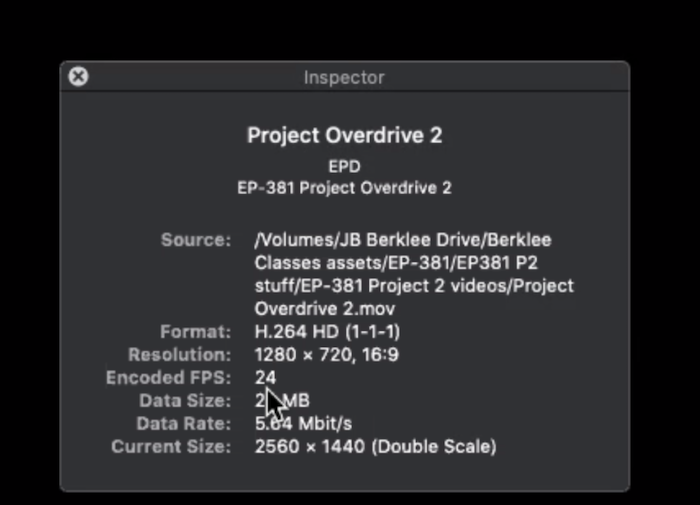 As you can see, the FPS is written down and now you can go ahead and change the Framerate on your DAW when you import the video.

REMEMBER: when working with video, it's the video's FPS that rules the one you have to use for your DAW setup, not otherwise.

Thanks for reading, and I hope you learned something from this article. Now, go ahead and make sure you don't miss your Framerate on your next scoring project. Have fun!