Before Apple purchased Logic and rebranded it into what we know and love today, a company known as Emagic owned the license to the software. This is where the namesake “ES” or “E-synth” comes from. Since the rebrand, Logic has kept six of the original synthesizer instruments from Emagic’s version of the Software. These synths have been kept in-tact without many updates or interface changes, honoring Logic’s sound design roots.

Today's installment will cover ES P. This is a simple additive synthesizer named "P" for polyphonic. With up to 8 voices and 5 waveforms to mix and match, plus noise, this 80s-emulating software synth is simple but fun to mess around with. Unlike ES M, ES P features a full ADSR envelope as well as an LFO for some added modulation. 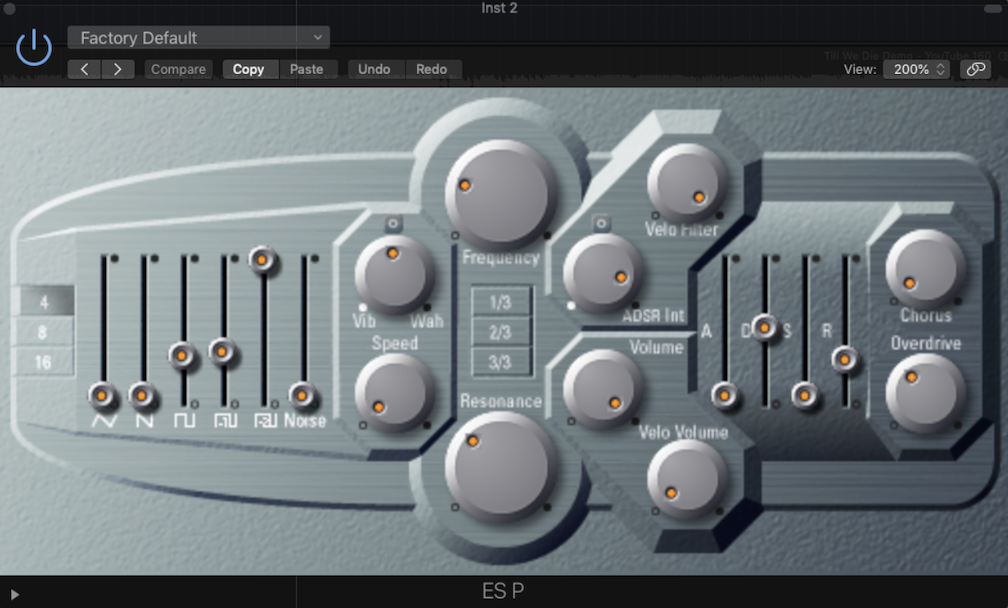 Oscillators - Ranges from OFF to Full Volume

TRIANGLE - Controls the volume of the triangle oscillator

SAW - Controls the volume of the sawtooth oscillator

SQUARE (Unison) - Controls the volume of the unison square oscillator

NOISE - Controls the volume of the Noise oscillator

Speed - Controls the LFO speed, i.e. increasing the number of modulation cycles in a certain amount of time. Ranges from SLOW to FAST.

Resonance - Controls the peak gain at the LP cutoff frequency, which can induce a tone at the cutoff frequency when used to the extreme. Ranges from 0% Peak (unity gain) to 100% Peak.

1/3, 2/3, 3/3 - Allows filter cutoff to follow the pitch. 3/3 turns on full key tracking, where the filter cutoff frequency would follow pitch at a 1:1 ratio. 2/3 and 1/3 use smaller ratios and would filter out more of the sound relative to the pitch as you go up in Octaves.

Volume - Output volume control of the envelope. Ranges from QUIET to LOUD.

Envelope Control - If you need a detailed look at envelope and synthesis, *ADD LINK*

A - Controls the attack time of the envelope. Ranges from SHORT to LONG.

D - Controls the decay time of the envelope. Ranges from SHORT to LONG.

R - Controls the release time of the envelope. Ranges from SHORT to LONG.

Overdrive - Controls the amount of overdrive distortion at the output of the synth.