Before Apple purchased Logic and rebranded it into what we know and love today, a company known as Emagic owned the license to the software. This is where the namesake “ES” or “E-synth” comes from. Since the rebrand, Logic has kept six of the original instruments from Emagic’s version of the Software. These synths have been kept in-tact without many updates or interface changes, honoring Logic’s sound design roots.

First up, we have ES M. This simple subtractive synthesizer is named “M” for monophonic. This means that the synth can only play one note at a time, making it most commonly used for designing bass sounds. ES M is definitely the most simplistic and minimalistic of all of Logic’s synthesizers. The synth uses nice labels for easy understanding and is a great place to start with synthesis. You can get some pretty thick sounds out of this thing!

One thing to note is that there is no full ADSR built into this synth, only a decay control. It features two oscillators that can be mixed together, one low pass filter, and some simple volume envelope controls. 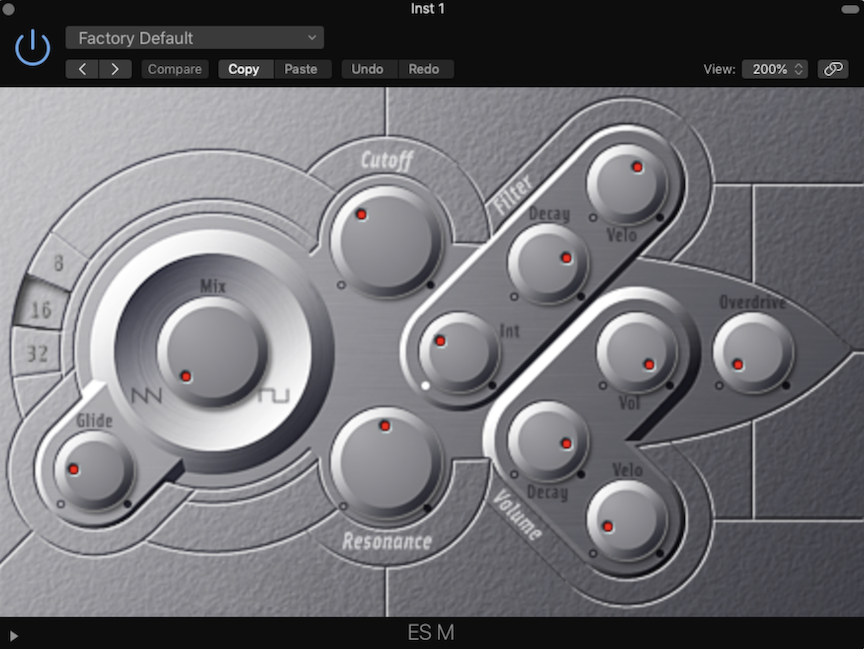 Glide - Also known as portamento, glide controls the time it takes for the synth to glide/bend into the next note if they are played legato, one after the other.

Mix - Blends the available SAW and SQUARE oscillators. Putting the knob equally between the two waveforms will blend an equal amount of each.

Cutoff - Controls the cutoff frequency of the Low Pass Filter.

Int - Controls the amount of cutoff frequency modulation. Note that, if this is off, Decay and Velo have no effect.

Decay - Controls the decay time of the modulation of the filter. Longer decay means the cutoff frequency modulation rolls off slower. 0% is the fastest, 100% is the slowest

Vol - Controls the output volume control of the envelope.

Decay - Controls the decay time of the Volume envelope.

Overdrive - Controls the amount of overdrive distortion at the output of the synth.

Keep watch for part two, an exploration of ES P!